HAVE A PUBLIC PLACE?

Then you are in the right place for a quality restyling! Send a plan via e-mail with your wish list and your contact details, we'll get back to you with an interesting solution!
Toggle SlidingBar Area

The comfort of a home, an office, is a key requirement in designing places and environments, because it aims to improve the quality of living and ensure high levels of well-being for all users.
It is our task as designers to know, evaluate, and design the best solutions that take into account the many parameters that affect environmental well-being.
To know means to gather all the information about the features of the location (climate, dominant winds, irradiation …), the destination of the premises, the building materials, the habits of the users. Based on these indications, the positive aspects to be used and the negative aspects to be addressed through an integrated design are subsequently evaluated.
In order to evaluate the levels of optimal comfort refer to the following welfare classes:

The human body continuously exchanges heat with the surrounding environment by convection, radiation and evapotranspiration. In particular, heat exchange by radiation takes on important importance for environmental well-being as small differences in temperature between the body surface and the surfaces of the environment involve considerable quantities of exchanged energy that can cause discomfort (remember that the Physics law describing heat exchanges by irradiation Qirr = ε * σ * (T14 – T24), temperature differences are elevated to fourth power). Consequently, in order to ensure levels of comfort it is essential to avoid phenomena related to local discomfort such as:

The protection of environments from outside noise or from adjacent environments is becoming more and more important either for the requirement of a regulatory certification added to the current law (DPCM 5/12/97) and for the increasing sensitivity of people to noise pollution issue. 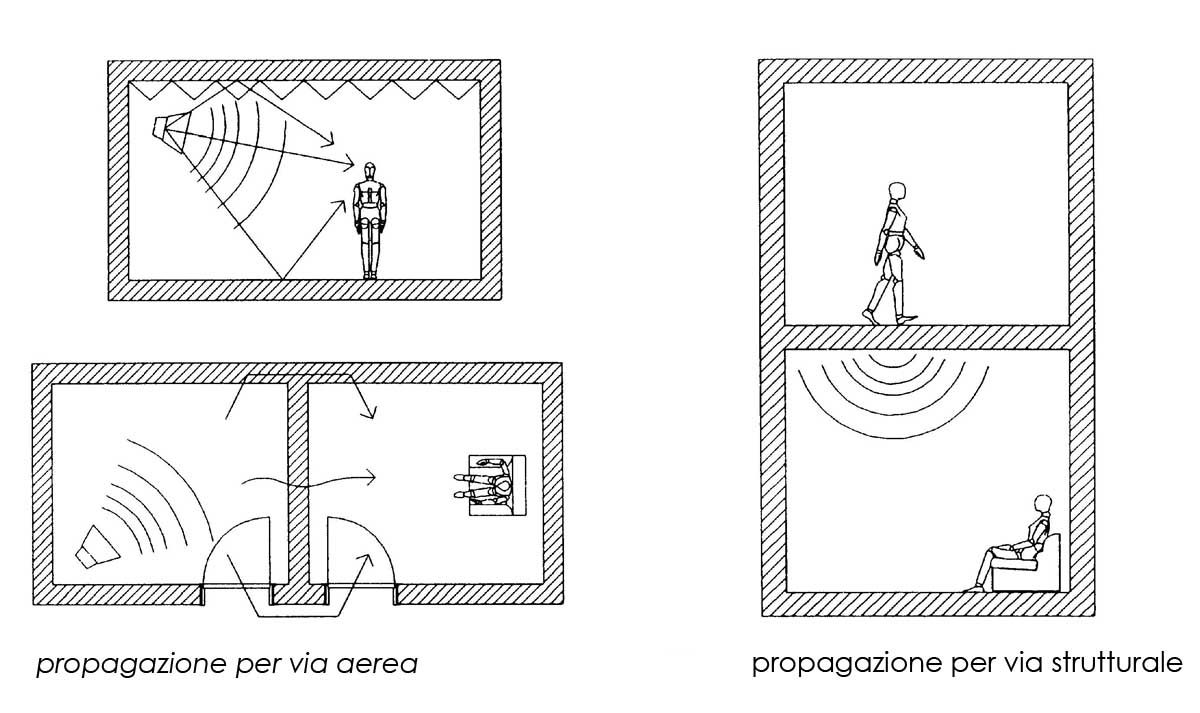 Once the external or internal noise sources are defined, the sound waves propagation modes are then evaluated within the various environments of a building that can be divided into:

Aerial noise propagates in two ways: by direct air, where the sound source is in the same environment as the listener who is reached directly by the sound waves without them undergoing any attenuation (with the exception of the absorption and reflection phenomena depending on the geometry and surface coatings of the environment) due to the presence of obstacles such as walls, floors.
By indirect air when the sound wave undergoes attenuation by the presence of obstacles (partition walls) in its propagation path. The type of air noise is closely related to the acoustic performance of the building structures that make up the housing, building skin (vertical walls, roofs, floors). Another mode of propagation is the structural one where sound waves are generated by vibrations of impacted structures (floor clomping noise). This type of noise depends on the acoustic characteristics of the structures (floors, partition walls), and of finishes (plaster, floors) inside the building. The acoustic welfare is evaluated in terms of acoustic quantities such as:

Air propagation occurs conventionally in two ways: by direct air, that is when the sound source is contained in the room where the listener is present. In this case the sound waves that developed from the source reaches the listener without encountering obstacles and do not encounter walls to cross but only surfaces from which they are reflected. The phenomena involved are therefore substantially reflection and absorption. By air, but through partition walls, that is, when the sound wave, in its propagation path, encounters a wall to cross so that, before reaching the listener, it attenuates the amplitude according to the specific modes that we will see below.
With reference to the physical laws regulating aerial noise transmission, a shell of the building made up of different sub-systems is the element with the worst acoustic performance to affect overall acoustic behavior, so on a facade the window system and the wall attachment node represent the weaknesses to which more attention is to be given. 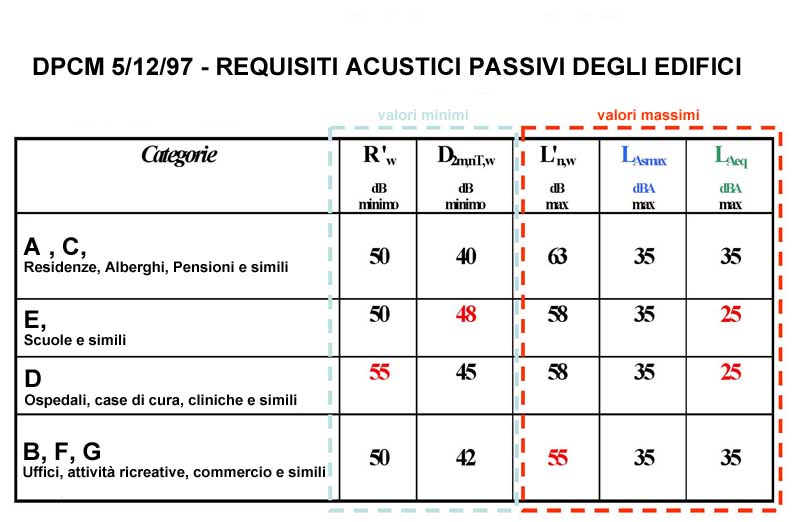 Classification of living environments and their limit values

The existing Italian legislation regulates noise pollution through DPCM 14/11/97 which establishes noise limit values and with DPCM 5/12/97 defining the acoustic passive requirements of buildings that are divided into seven categories according to their use. For each category the decree sets the limit values for the acoustic performance of the building and its components with reference to the following measured values:

The acoustic behavior of a building element is described through a graph in which the values reported are derived from a frequency range between 100 and 3150 Hz (measurements in operation) The acoustic performance of buildings and their components is defined by UNI EN ISO 717-1-2-3 through a single number parameter, called “ rating index” that is obtained by superimposing the reference curve defined by ISO, with the experimental curve so that the average of unfavorable deviations calculated on the whole frequency band is less than 2 dB. Once checked, the rating index on the reference curve corresponding to the frequency of 500 Hz will be read.

Physical parameters so far described represent the various physical phenomena that affect environmental acoustics without providing any indication of subjective perception of sounds, subjective intensity, and the effects of disturbance that certain noises produce.
The sound as perceived with psychosensory features is defined by:

Visual well-being represents the optimum level of light that allows our eyes the best visual perception of the environment, intended as the highlight of contrasts of colors and brightness, the distinction of objects even the most distant ones …
Visual well-being is a highly articulated subject, and still under debate today, due essentially to the multiplicity of affecting factors that influence the performance; among which we remember:

To these are to be added the physiological factors of the eye: